Steve Jobs’ WWDC 2011 Keynote is less than a few minutes away, and the rumors are abuzz about the notion that iCloud will be the new iTunes. John Gruber’s article mentions that this service will encompass much more than just music, but for many, that music portion is the biggest of this new service, at least for the immediate future.

I had hoped for quite some time that what is now known as the music portion of iCloud would be an Apple subscription music service, as opposed to more of a Music Locker Service, such as Amazon Cloud Storage/ Player or Google Music. I was hoping that in true Apple form, it would be less of an either/ or proposition, and more of a complete solution that would help bridge the gap between previously owning music, and accessing an unlimited amount of music online.

A confession - One of my favorite music services is the currently European-only Spotify. From the first time I had the opportunity to try it, I was hooked. Being able to access millions of tracks at performance that was previously unseen from a “streaming” service is where the industry should be going. Month upon month, I have been waiting for the service to launch stateside, and even to this day I still wait for that fateful day when I can convert my account. Until then, I’ve been using Rdio, which offers many of the same Spotify benefits, but already has a stateside presence. 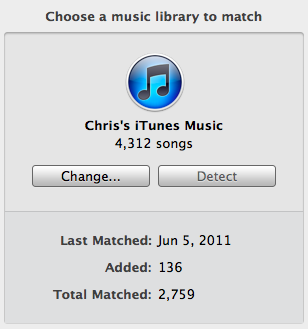 Based on my Spotify and Rdio experiences, I want any and all music I discover and listen to from this point on to be from a subscription streaming service - I’m happy to pay for a listening privilege, but I don’t want to buy any more music. At the same time, I want to listen to all the music I’ve accumulated over the past few decades(!). Using Rdio’s “Match Collection” feature, I’ve got almost 1600 tracks that Rdio doesn’t match. These are tracks such as live mixes, “joined track” albums and other obscure tracks that are not and likely never will be in either a Rdio or Spotify catalog. I need the Music Locker feature set just as much as I want the streaming.

Given Spotify’s track record in getting to the states, I don’t put much stock in them creating a Locker service anytime soon. Google is too dedicated to Android at the moment that I can’t bank on them supporting iOS (my preferred Phone/ Tablet OS) in lockstep with Android. Amazon has the best non-smartphone provider chance of doing a full featured music service, but I worry about pricing for the amount of music I need to store (60GB+).

This leaves Apple. I believe that all-you-can-eat services are how music will be listened to in the future, but we also need to have support for media that these services won’t/ can’t provide. I also believe Apple to be a forward thinking company and the future is in streaming services. I know that we’re likely not going to hear a thing about a streaming music service from Apple, but I hope within the next year we get that as part of the iTunes/ iCloud picture.